William Burroughs at his writing machine, New York, fall 1953. One of numerous, rarely seen photographs taken by Allen Ginsberg that feature in a special Gallery section of Naked Lunch@50, here Ginsberg’s Kodak Retina records a crucial moment for Burroughs, as he worked on the manuscripts of “Queer” and “Yage” before heading off towards Tangier and the writing of Naked Lunch… (Courtesy of the Allen Ginsberg Trust and Stanford University Library.) from reality studios

Poster announcing the launch of Naked Lunch@50: Anniversary Essays
Among those attending were many friend of Burroughs and his cut up collaborators Brion Gysin, Antony Balch, Harold Norse and Antony Balch. For further celebrations see www.nakedlunch.org
hear Willaim Burrough reading the Last Words of Hassan Sabbah. Hassan Sabbah was the founder of the Ismaeli sect of Islam and the "Old Man of the Mountain" in the fiction and writing of William Burroughs and Brion Gysin click link below

http://www.interpc.fr/mapage/westernlands/Derniersmots.html
Click here to listen to it or download it in Real Player : Last Words of Hassan Sabbah

Images from the Naked Lunch 50th in Paris. Below 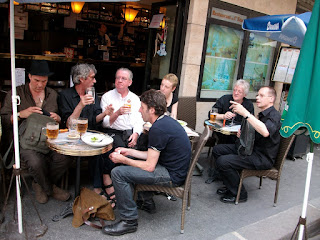 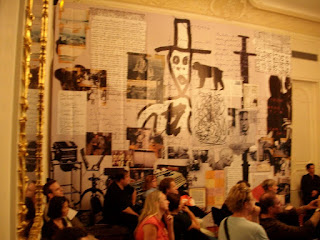 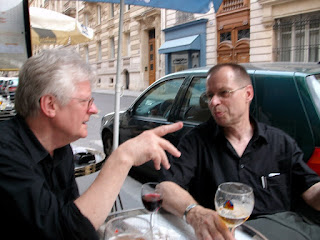 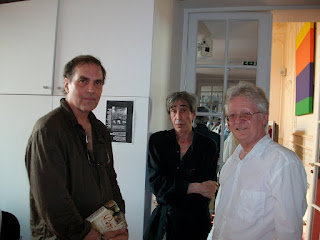 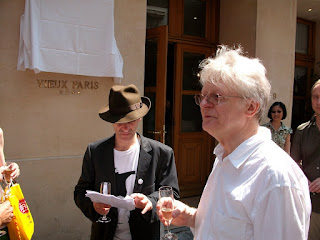 
William Burroughs from Nova Express
LISTEN TO MY LAST WORDS anywhere. Listen to my last words any world. Listen all you boards syndicates and governments of the earth. And you powers behind what filth consummated in what lavatory to take what is not yours. To sell the ground from unborn feet forever - "Don't let them see us. Don't tell them what we are doing -" Are these the words of the all-powerful boards and syndicates of the earth? "For God's sake don't let that Coca-Cola thing out - " "Not The Cancer Deal with The Venusians - " "Not The Green Deal - Don't show them that - " "Not The Orgasm Death - " "Not the ovens - " Listen: I call you all. Show your cards all players. Pay it all pay it all pay it all back. Play it all pay it all play it all back. For all to see. In Times Square. In Picadilly. "Premature. Premature. Give us a little more time." Time for what? More lies? Premature? Premature for who? I say to all these words are not premature. These words may be too late. Minutes to go. Minutes to foe goal - "Top Secret - Classified - For The Board - The Elite - The Initiates - Are these the words of the all-powerful boards and syndicates of the earth? These are the words of liars cowards collaborators traitors. Liars who want time for more lies, Cowards who can not face your "dogs" your "gooks" your "errand boys" your "human animals" with the truth, Collaborators with Insect People with Vegetable People. With any people anywhere who offer you a body forever. To shit forever. For this you have sold out your sons. Sold the ground from unborn feet forever. Traitors to all souls everywhere. You want the name of Hassan i Sabbah on your filth deeds to sell out the unborn? What scared you all into time? Into body? Into shit? I will tell you; "the word." Alien Word "the." "The" word of Alien Enemy imprisons "thee" in Time, In Body. In Shit. Prisoner, come out. The great skies are open, I Hassan i Sabbah rub out the word forever. If you I cancel all your words forever. And the words of Hassan i Sabbah as also cancel. Cross all your skies see the silent writing of Brion Gysin Hassan i Sabbah: drew September 17, 1899 over New York. PRISONERS, COME OUT "Don't listen to Hassan i Sabbah," they will tell you. "He wants to take your body and all pleasures of the body away from you. Listen to us. We are serving The Garden of Delights Immortality Cosmic Consciousness The Best Ever In Drug Kicks. And love love love in slop buckets. How does that sound to you boys? Better than Hassan i Sabbah and his cold windy bodiless rock? Right?" At the immediate risk of finding myself the most unpopular character of all fiction - and history is fiction I must say this: "Bring together state of news - Inquire onward from state to doer -" Who monopolized Immortality? Who monopolized Cosmic Consciousness? Who monopolized Love Sex and Dream? Who monopolized Life Time and Fortune? Who took from you what is yours? Now they will give it all back? Did they ever give anything away for nothing? Did they ever give any more than they had to give? Did they not always take back what they gave when possible and it always was? Listen: Their Garden Of Delights is a terminal sewer - I have been at some pains to map this area of terminal sewage in the so called pornographic sections of Naked Lunch and Soft Machine - Their Immortality Cosmic Consciousness and Love is second-run grade-B shit - Their drugs are poison designed to beam in Orgasm Death and Nova Ovens - Stay out of the Garden Of Delights - It is a man-eating trap that ends in green goo - Throw back their ersatz Immortality - It will fall apart before you can get out of The Big Store - Flush their drug kicks down the drain They are poisoning and monopolizing the hallucinogen drugs - learn to make it without any chemical corn - All that they offer is a screen to cover retreat from the colony they have so disgracefully mismanaged. To cover travel arrangements so they will never have to pay the constituents they have betrayed and sold out. Once these arrangements are complete they will blow the place up behind them. And what does my program of total austerity and total resistance offer you I offer you nothing. I am not a politician. These are conditions of total emergency. And these are my instructions for total emergency if carried out now could avert the total disaster now on tracks: Peoples of the earth, you have all been poisoned. Convert all available stocks of morphine to apomorphine. Chemists, work round the clock on variation and synthesis of the apomorphine formulae. Apomorphine is the only agent that can disintoxicate you and cut the enemy beam off your line. Apomorphine and silence. I order total resistance directed against this conspiracy to pay off. peoples of the earth in ersatz bullshit. I order total resistance directed against The Nova Conspiracy and all those engaged in it. The purpose of my writing is to expose and arrest Nova Criminals: In Naked Lunch, Soft Machine and Nova Express I show who they are and what they are doing and what they will do if they are not arrested. Minutes to go. Souls rotten from their orgasm drugs, flesh shuddering from their nova ovens, prisoners of the earth to come out, With your help we can occupy The Reality Studio and retake their universe of Fear Death and Monopoly (Signed) INSPECTOR J. LEE, NOVA POLICe
Photos of the plaque unveiling at William S. Burroughs' Naked Lunch 50th Anniversay
1 July in Paris see