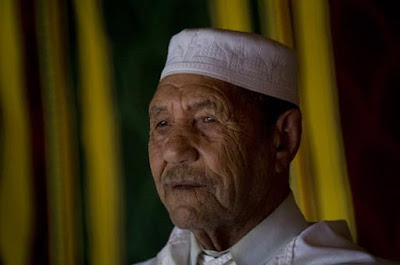 Last year he presided over the Brian Jones 40th Anniversary Festival in Joujouka as he did at this year's festival in June. The reverence shown to him by the Masters is evident when they arrive at the musician's house in Joujouka. His presence is always something to be appreciated as a blessing. He is the spiritual leader of the musicians by virtue of his age, his wisdom and his adherence to the saint, Sidi Ahmed Scheich, whose blessings he attributes his longevity to.

At nearly 100 year of age Mallim Ali has had a hard life. In 1936 he was conscripted by General Franco into the Spanish colonial army and was forced to fight in all the battles in the Spanish Civil War. This was an experience that many his generation of Sufi masters in Joujouka endured. He was retained in Spain until the end of World War II and then returned to his native Morocco without pay or pension.

From 1945 onwards he continued to play with The Master Musicians of Joujouka and was a veteran of Hamri's efforts to support the village by bringing the musicians to play on the trains between Ksar El kebir and Tangier, in the International Zone. This was the Interzone of William Burrough's fiction. In the 1950s he played at Brion Gysin and Hamri's restaurant, the 1001 nights in Tangier. This is where William Burroughs first saw the Master Musicians perform. He recalls his playing for Brian Jones with humorous glee. However a sadness also descends on Mallim Ali when he recalls those days to people. He always insists on naming the great masters who played with him who are now dead.

Last year, award winning rock photographer, Jill Furmanovsky, made a series of portraits of Mallim Ali which were published in the Onelife magazine. Other photographs by Jill of the Brian Jones 40th Anniversary Festival in Joujouka have appeared in The Guardian, Dazed and Confused and Mojo . The festival was celebration by the village of jaoujouka/Joujouka of brian Jones visit to record an LP in 1968. The resulting LP "Brian Jones presents the Pipes of Pan at Joujouka" was the first release on Rolling Stones Records in 1971. A small selection of her images from the Brian Jones Festival are available on The Master Musicians Myspace.

This June I brought copies of the magazine to the village and the day before the festival and on 4 June 2009, I presented Mallim Ali with a copy. In the below slide show you can see Mallim Ali looking at the magazine and I really like the photo I took of him with Jill's photo open on a magazine page with his full page portrait. Michael Pollock and his son Marlon were on the porch and Master Musicians Mohamed Mockshan and Radi El Kahil arrive and greet the Master. It is obvious in the photos the reverence that the Masters have for Mallim Ali. I always bring several tubes of prescription eye ointment for him as he has severe eye pain and discomfort. He always blesses me for this small gesture.

Mallim Ali Abdeslam El Attar and Frank Rynne discuss Brian Jones and the recording of Brian Jones presents the Pipes of Pan at Joujouka, (Rolling Stones records 1971) for Zac Assemakis's film on the Brian Jones 40th Anniversary Festival in Joujouka. 29 July 2008.
Photo copyright Jill Furmanovsky/Rockarchive
The day I left Joujouka in June he called me to one side and asked me where was the money gone from the Brian Jones recording and the other records he played on such as the Master Musicians of Jajouka record that Joel Rubiner put out in 1974 and Ornette Coleman's "Dancing in My Head" .

Sadly the answer is not a mystery as other posts on this blog have revealed. Cherie Nutting , her ex husband Bachir Attar and Joel Rubiner, who runs a successful business in New Mexico selling Moroccan leather, have the answers. Philip Glass's label Point Music reissued the Brian Jones LP in 1995 and no one thought to consult or include Mallim Ali or the other Masters and their families in the remuneration that ensued.

what a beautyful day...its so good to hear hear see read the history of these great cats i met in joujouka...looking into Malims eyes is like looking into the nite sky he is here yet so far beyond...great sufi shaman elder of the tribe...i look forward to hearing seeing more about each musician as my studies of speaking arabic is still in infantile stage...all i know is these cats got soul...both my visits to joujouka in 08 and 09 were more than well worth the while...i look forward to visiting again...inshallah