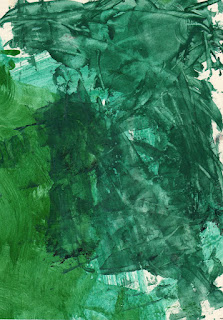 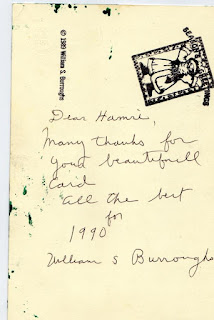 Hamri and I had first met him [Burroughs] in the hired gallery of the Rembrandt Hotel in Tangier in 1953, when he wheeled into our exhibition, arms and legs flailing, talking a mile a minute. We found he looked very Occidental, more Private Eye and Inspector Lee: he trailed long vines of Bannisteria Caapi from the Upper Amazon after him and old Mexican bullfight posters fluttered out from under his long trench coat instead of a shirt. An odd blue light often flashed around under the brim of his hat. (Brion Gysin Let the Mice In, p.8) See Oliver Harris on Rembrandt Hotel 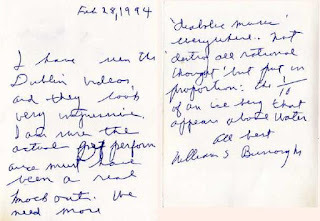 Feb 28, 1994
I have seen the Dublin videos and they look very impressive. I am sure the actual performance must have been a real knock-out. We need more ‘diabolic music’ everywhere.
Not destroy all rational thought but put in proportion the 1/10 of the iceberg that appears above the water.
All best
William S. Burroughs
Posted by Brian Jones Joujouka Festival at 9:25 AM