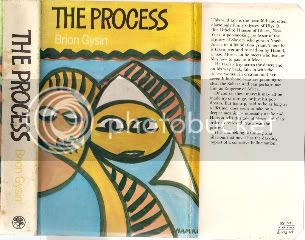 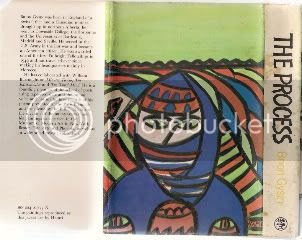 The 1969 first edition of Brion Gysin's novel the Process featured two paintings by Hamri. The Moroccan painter was a constant in Gysin's life throughout his 23 years in Morocco. Hamri famously introduced Brion to the music and musicians of his mothers tribe The Master Musicians of Joujouka/Jajouka. The character Hamid in the novel is based on Hamri.
The first edition was published by Jonathan Cape, London in 1969.
large versions
front cover

In 1959, Gysin wrote : ” Writing is 50 years behind painting.” He attributed this time lag to the fact that the painter can touch and handle his medium, whereas the writer cannot. The writer does not yet know what words are. He deals with abstractions from the source point of words. Few writers are even trying to establish tactile communication with words. Words are secret untouchable objects, is it not? Superstitious awe of one’s medium is crippling, and cripples fall behind. This cultivated distance from the medium also places writing behind film and TV, regardless of content. Unless writing can bring to the page the immediate impact of film, it may well cease to exist as a separate genre. We are no longer living in the 19th century. The omniscient author who can move into the past, the future and the minds of his characters is an outworn device.

In “The Process”, Gysin has eliminated the obtrusive explanatory author.

Posted by Brian Jones Joujouka Festival at 5:53 AM