Michael Pollock the American Icelandic bluesman/Hillbilly Viking and general beatnik world traveller attended both the 2008 Brian Jones 40th Anniversary in Joujouka and this year's festival from 5-7 June.
Michael was a great spirit at both festivals. Last year he stayed with Master Musician Abdelsalm Ertoubi.
this year he was the guest of Mohamed Attar another of Joujouka's Master rhiata players.
Michael is a friend of and collaborator with Honey Boy Edwards

Edwards was a friend to the legendary Robert Johnson. Folklorist Alan Lomax recorded Edwards in Clarksdale, Mississippi in 1942 for the Library of Congress.[1]
Read Michael's account of his visit to Joujouka below: 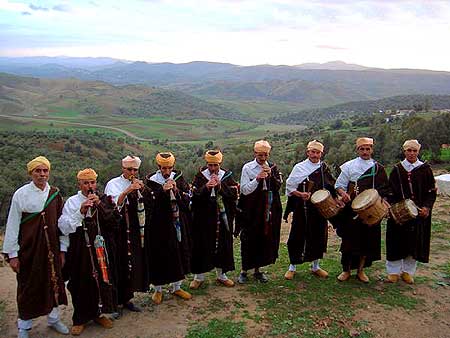 Reel back...eary April of this year i am invited to do a guest appearance onstage with Honeyboy Edwards , visit his home and hang out in Chicago´s blues mecca two days and nights. 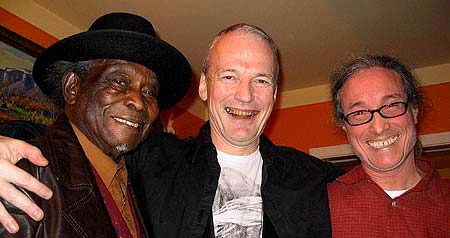 Reel forward...early June sitting in Boujeloud/Pans cave overlooking the beautyfull lush fertile grounds of Joujouka in the hills of Morocco i feel like i have died and gone to paradise feeling humbled and blessed with a powerful sense of inner peace and strength. 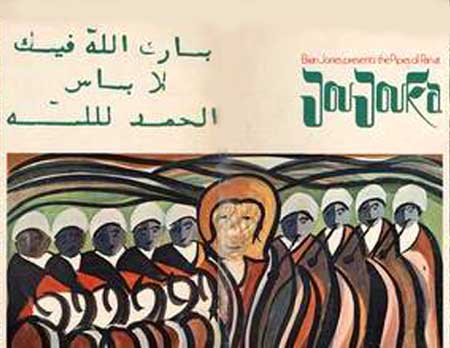 I first encountered the healing music of The Master Musicians of Joujouka via recordings Brian Jones founding member of The Rolling Stones had made during a visit to the village in 1968...immediately enchanted by the otherworldy exotic sounds pouring out of the speakers i am compelled to search further encountering several collaborations between Ornette Coleman and the Master Musicians released on vinyl 1973.

I had also hearing soundbytes of The Master Musicians incorperated into taped audio cutup experiments by Brion Gysin and William S. Burroughs quickly realizing that the only way i was going to experience this music full throttle was to some day visit Joujouka and experience it live so when i received a call from Frank Rynne early last year telling me the musicians would be celebrating the 40th anniversary of Brians visit to the village i immediately recognized NOW is the time! 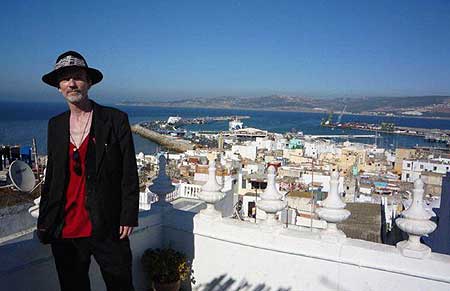 I have traveled to many places in my life´s journey but little did i imagine how stunning and powerful Morocco is...rife with magic unfolding right under under yr nose at all times. Something changed inside of me forever for the better. It's hard to find words to describe the power of the music. I have listened to a lot of traditional and contemporary Morrocan music but no way was i remotely prepared for the music i was about to hear in Joujouka...these cats are genuine bad ass´ playing with an intensity way beyond the norm breaking all barriers as Jimi Hendrix and John Coltrane for example did in their own time in the western world and beyond. 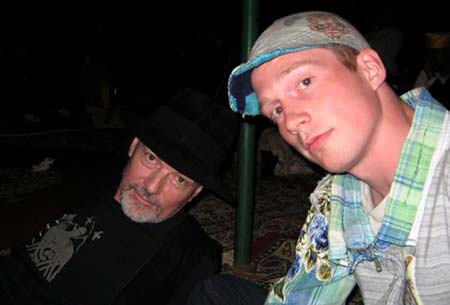 My son, Marlon Pollock and i arrived in Tangiers early June of this year staying at Hotel El Muniria , Tangier's Beat Hotel where Burroughs lived for months creating his ground breaking novel " Naked Lunch " When we arrived in Joujouka we were delighted to find ourselves welcomed into the home of master musician Muhamed El Attar and his family who showered us with love and hospitality for three days and nights. 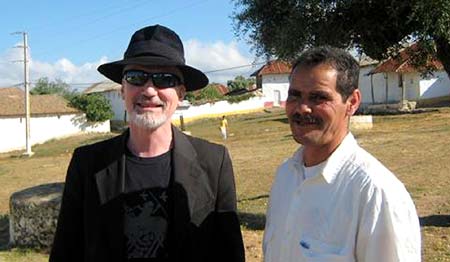 It was a different scene from my visit the previous year. Having Marlon with me i came into full contact with the youth of Joujouka who were almost invisible last year the town square filled with flood lights , filming and recording gear that most of the villagers tend to shy away from. 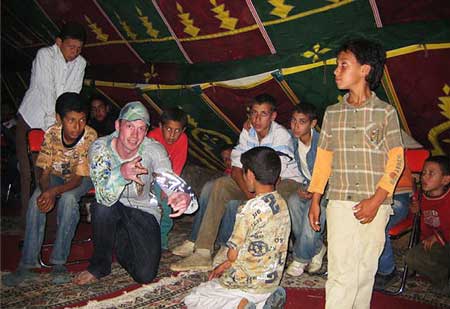 Marlon Pollock and the Joujouka boys in the hood

Though it was necessary to document last years event for release on dvd & cd ( soon coming ) this time around all filming and recording was banned which made for less distractions and the peoples of Joujouka joyfully filled the town square on a full moon saturday night to dance and celebrate. Not only did i experience some of the greatest music i have ever heard but i also experienced some brilliant dancing as well an integral part of the ancient timeless festivities as Aisha cast her spell and Boujeloud / Pan whipped the dancers into a frenzy urging the musicians to further heights of ecstacy i felt in that moment i was at the greatest universal jazz concert in the universe as the band pulled out riff after riff riding a tidal wave of variating beats for hours...

i have never witnessed such power , passion and stamina in any group of musicians before...i surrendered to the music as the flames from the bonfire leapt into the sky...as dawn was approaching Marlon and i walked or rather floated back to our sleeping quarters bathed in a luminous light as a star raced across the sky disappearing behind the hills on the horizon i made a silent vow to return to Joujouka at every opportunity up to my last breath...

To Learn More about this wonderous celebration of Music, Spirit and the Master Musicians of Joujouka Click Here and visit www.joujouka.net .

Also be sure to visit the Master Musicians of Joujouka MySpace Page for more Info, Photos, Videos and Mp3's!

The October 08' issue of Mojo Magazine carried Mark Paytress' feature article on the Brian Jones 40th Anniversary Festival in Joujouka, "You Should be Trancin" Click Here To Read!