A once-in-a-lifetime chance to experience a day and night in Joujouka as guests of the Master Musicians of Jououka and their families in their mountain village on 29th July 2008, the 40th Anniversary to the day of Brian Jones's famous visit to the village.

On 29th July 1968 following in the footsteps of William Burroughs, Robert Palmer and Paul Bowles, Brian Jones came to Joujouka with Brion Gysin, Mohamed Hamri and engineer George Chkiantz to record an album with the Master Musicians of Joujouka.

The resulting LP was the first release on Rolling Stones Records in 1971 "Brian Jones presents the Pipes of Pan at Joujouka".

The following year Timothy Leary visited Joujouka and in 1973 Ornette Coleman recorded here. In 2006 Smashing Pumpkin Billy Corgan stayed in the village with The Master Musicians. The musicians are renowned for its Sufi trance music and the Boujeloud rite or the Rites of Pan. 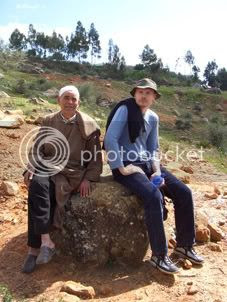 To mark the 40th anniversary of this historic recording, the Master Musicians of Joujouka are staging a celebratory festival on 29th July 2008. The musicians will perform the Sufi healing music of Joujouka. There will be a a visit to the 8th century sanctuary of Joujouka's patron saint Sidi Ahmed Schiech. It will also be possible to visit the cave of Boujeloud, Magara, which is a short trek outside the village.

The evening and night will be devoted to the healing trance music of Joujouka.

After dinner, the night will be filled with a full performance of the Boujeloud Rite, which is likened to the ancient Rites of Pan.

Joujouka is a farming community with strong Sufi traditions, located in the Ahl Srif Mountains some 80 km south of Chefchaouen and 20km from Ksar El Kebir.
It is a halal village; therefore, both presence and consumption of alcohol is strictly forbidden.

Accommodation will be provided in traditional Joujouka houses with the musicians' families. This is a unique opportunity to experience a festival in the village and Joujouka life.

Full board will be provided: lunch on arrival on the 29th, a celebratory meal in the evening including charcoal roasted sheep and a wide variety of mountain dishes including vegetarian specialities, and breakfast will be provided on the morning of the 30th. All the dishes will be prepared by the villagers and will be traditional Moroccan fare for a celebratory feast.

The people of Joujouka are renowned for their hospitality, their music and their cooking.

Places are limited
This once-in-a-lifetime experience is available to a strictly limited 50 places. This is due to accommodation limitations in the village, which is 20km from the nearest urban centre.

Ticket holders must make their own way to Ksar El Kebir which is 90 km south of Tangier.
Ticket holders will be transported from Ksar El Kebir's main train station ("Mouley Mehdi") at a designated time on the morning of 29th to the Ahl Srif mountains and Joujouka 20km and 30 mins away. Return transport to Ksar El Kebir will be provided on 30th to meet connecting trains, buses and grand taxis. Ksar El Kebir is served by the main ONCF train services from Tangier, Marrakesh, Fez and Oujda. It is also serviced by buses and Grand Taxis.

The village is also accessible by road.

NB: It may also appear as Jajouka or Zahjouka on maps. Car drivers will be provided with detailed instructions and a map.

There will be people on hand who speak French/English and Arabic!

Visitors will enjoy the full hospitality of The Master Musicians and people of Joujouka.

The price for this unique experience is €250 per person.
Booking Now limited to less than 40 places

Music and more on Master Musicians of Joujouka Myspace