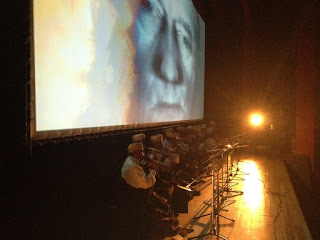 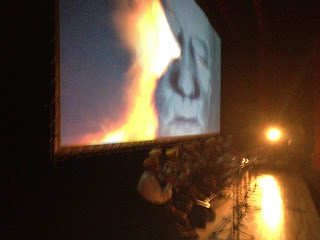 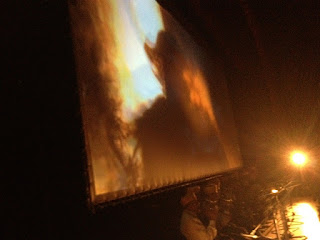 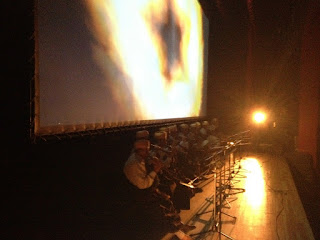 Joujouka Interzone photos Frank Rynne
The premiere performance of Joujouka Interzone was a great success. The,  mainly teenage, audience were treated to a blasting performance by Hamburg sound and visual artists Incite followed by Joujouka Interzone, which is an aural and visual collaboration between the Master Musicians of Joujouka, Joachim Montessuis and Frank Rynne. The concept places a historical context on the flicker experiments of Brion Gysin and Ian Sommerville which culminated in the Dreamachine as well as the other gift Gysin gave to 20th centuary art "The Cut-Up Method" which Gysin gifted to William Burroughs and contextualizes the place in that history of  the alpha wave frequency and repetition of The Master Musicians of Joujouka trance music.
The visual mixing of archival footage and images of  William Burroughs, Brion Gysin, Dreamachines, Mohamed Hamri, Brian Jones,  The Master Musicians of Joujouka and Boujeloud  as well as recent footage was based on  flicker seamlessly linking with the Master Musician's  live performance.
.
Joujouka Interzone began with the Masters entering the theater from behind the audience playing wildly  as they strolled to their positions on stage. The 1 hour and 20 min performance built to a crescendo of sound and visuals which replicated the intensity of a Dreamachine high with a full performance of the Boujeloud suite of music. As has been traditional in the village since the early 1970s the song Brian Jones Joujouka very Stoned heralded  boys dancing as  Aisha Kandishas on stage.  Boujeloud danced in flicker with Gysin and Burroughs on screen,  while Boujeloud in person danced wildly on stage and through the theater  to the cheers of the audience. The two young dancers from Joujouka were stars in their roles as Crazy Aisha Kandisha.
The Master Musicans of Joujouka, Joachim Montessuis and Frank Rynne would like to thank all the staff at Centre Cultural Moulay Rachid for their excellent professionalism which ensured great sound and vision.
The show was part of the F.A.N. festival and we would like to also thank all the organisers for ensuring that the production was to the highest international standards especially the festival director  Majid Seddati, and Fatima, Ali and Mohamed who made the day a pleasure. Merci, Thank you, Sukran Besef.
Over the next few days we will be uploading video and sound from the performance but in the meantime here are a few random stills from the night taken by Frank on Joachim's new iphone from the visual mixing station at the side of the stage.
Posted by Brian Jones Joujouka Festival at 2:18 PM