EDDIE WOODS BACK IN NO TIME: Jajouka, Bou Jeloud and the Moroccan Magic of Brion Gysin 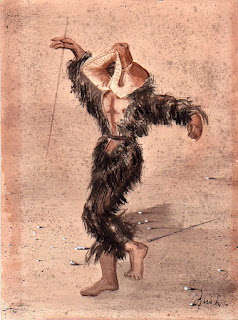 Brion Gysin Boujeloud at Joujouka 1958
BACK IN NO TIME: Jajouka, Bou Jeloud and the Moroccan Magic of Brion Gysin
By EDDIE WOODS
“I'm not here to put anyone down. I'd just like to make a few suggestions.”
Ira Cohen

I first heard the Master Musicians of Jajouka in 1950. It was at a festival outside of Tangier on the beach, a small harbor that went back to Phoenician times... I was there with Paul Bowles. Paul, of course, was an established composer before making his name as a writer and also an archivist of North African music. Anyway, it was Paul’s idea that I go to Morocco, he had bought a little house there and all. And I heard some music at that festival and was so taken by it, so enchanted, that I said to Paul, “I want to hear that music every day for the rest of my life. I want to hear it every day all day long.”

For sure, there were many other kinds of extraordinary music offered to one, mostly of the Ecstatic Brotherhoods who enter into trance, such as Jilala. But above all of that I had heard this funny little music, and I said, “Ah! That’s my music! I must find out where it comes from.” So I stayed and within a year I found that it came from Jajouka, a village in the Rif mountains where on several occasions during the year, whenever a festival comes round, the entire population of the Ahl Serif valley pours across the fields and wends its way, in procession, up the mountainside.

I mean, there would always be (and still is) a small group of the Masters traveling somewhere in the valley to animate a wedding or to honor some visiting dignitary. And my restaurant, The 1001 Nights, came about entirely because of them, it was their idea, as a way for me to stay in Morocco, hear their music all the time and earn my living. They said, “Why don’t you open a café or something in Tangier? Then we’ll come down, make the music and we can split the money.” Which is how it worked until 1956, when Moroccan independence wiped me out practically overnight... But I knew the Musicians for nearly 35 years, right up till the end, many of them in intimate daily contact.

Now in Jajouka when they play, and those things go on for seven days and nights, blue kif smoke rises and drops in veils and the air is flooded with this marvelous music, very magical, tirelessly executed by the Master Musicians, more than twenty strong. Each night they play 10-hour nonstop sessions as a cloud of dancing boys shimmers and sashays around a huge bonfire. The crowd whoops and hollers approval, while the women, all of them dressed in white, are heaped up on a hillside, their heads thrown back and mouths open, ululating to the heavens.

At some point a sense of urgency enters the music: the drums thunder and the shrill, almost bagpipe-sounding blare of the rhaitas (a double reed oboe-like instrument, similar to the Indian shanai) becomes like sheet lightning in the minds of the spectators. Higher and higher goes the music, heralding the appearance of a young man dressed in goat skins with a huge straw hat tied around his blackened face and carrying long sycamore branches. Chosen for the task since childhood, he is suddenly transformed, a young villager no longer. Bou Jeloud is there, the Great God Pan.

Oh, there are many confirmed stories of the Musicians on tour, even in Europe, picking off (as it were) unsuspecting members of the audience and--using only their horns, their Pipes of Pan--making these people dance, literally forcing them to, controlling them. But when Bou Jeloud dances alone in Jajouka, his Musicians blow a sound like the earth sloughing off its skin. When you shiver like someone just walked on your grave, that’s him; that’s Bou Jeloud, the Father of Fear, the Father of Skins, Pan...

If you want to disappear, come round for private lessons. Remember? OK, you’ve just had yours. Back in no time.

This particular presentation of Jajouka music is from a live performance in France and comes in cassette form. Published by Staaltape (Amsterdam), it is in some ways well done and in other respects a most unprofessional job. The nicely-printed cassette cover gives no information at all about the Musicians, the performance...nada. The cassette itself is unlabeled and has its tabs intact; not only does it look like a blank cassette, it can easily be recorded over by accident. Ditto for the accompanying cassette, an interesting but incomplete 40-odd minute interview with Brion that also tells nothing of Jajouka (there is a brief 'reference in passing,' bas) and which is recorded on only one side, the other side being (in)conveniently empty. Ah, and no times are given for the music tape, although my stopwatch assures me it’s 54 minutes. Both cassettes (+ plastic covers, thank goodness) come in a plain wooden box with a slide-off top, along with a well made hardbound book, Back In No Time: Some aspects of Brion Gysin and suggestions for use, by A.M. McKenzie. The title phrase is from a small sign Brion used to hang on the outside of his door whenever he left the house, whether for five minutes or five weeks. The whole shebang (this is a limited edition of 500 copies, by the way) was selling for the equivalent of ca. €18.00 when first released in 1989.

Brion Gysin, who died on July 13th 1986, discovered the cut-up method of writing. Indeed, he introduced William Burroughs to the technique. The above letter (from Brion) was received by this reviewer on May 8th 1989. Back in no time. Get it? 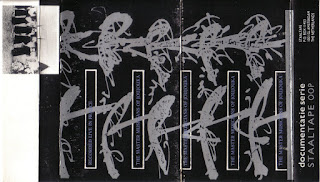 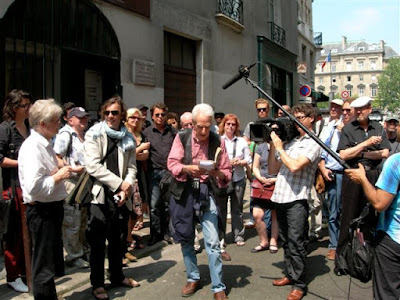 Text and Brion Gysin letter © Eddie Woods
Music © Master Musicians of Joujouka
The above review and letter were published at the time the staalplaat 2 cassette set was published in 1989. the 2 cassette limited edition of 500 was presented in a wooden box. special thanks to our friends Eddie Woods and Andrew McKenzie.